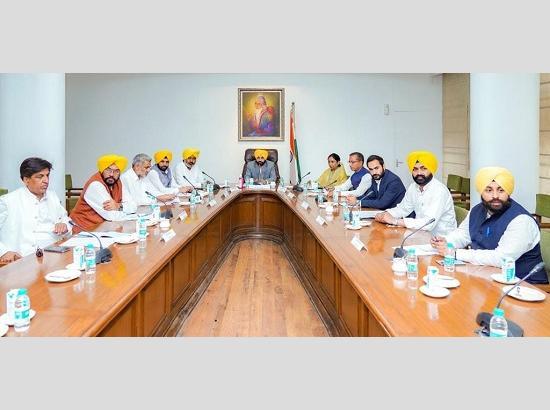 Chandigarh, May 11, 2022: It has been four weeks since on April 13, 2022 Punjab Cabinet presided over by Chief Minister Bhagwant Mann approved the Punjab Rural Development (Amendment) Ordinance.

However, the aforesaid Ordinance is yet to be promulgated by Punjab Governor B.L. Purohit even after passage of one month since its approval by the State Cabinet.

Meanwhile, an Advocate at Punjab & Haryana High Court, Hemant Kumar, last month itself raised legal (read constitutional) questions over the timing of decision of Bhagwant Mann’s Cabinet pertaining to approval to the aforesaid Ordinance but he has yet to get any satisfactory reply from Punjab Government.

The Advocate asserts that under Article 213 of Constitution of India, any Ordinance can be promulgated by the Governor of a State only when the LegislativeAssembly of that State is not in session.

As far as current 16th Punjab’s Assembly is concerned, it got duly constituted on March 11, 2022 vide issuance of statutory notification by Election Commission of India (ECI) under Section 73 of Representation of the People Act, 1951 however its First Session was summoned via a Notification dated 16 March 2022 issued by the State Governor under Article 174(1) of Constitution of India from March 17, 2022 i.e. a day after Bhagwant Mann took Oath of Office and Secrecy as Chief Minister of Punjab.

After administering Oath of all newly elected MLAs by Pro tem Speaker, Inderbir Singh Nijjar, AAP MLA from Amritsar South on March 17, 2022, there was election of Kultar Singh Sandhwan, AAP MLA from Kotkapura as regular Speaker of Punjab Assembly on March 21, 2022 . It was followed by passage of two Bills viz. Punjab Appropriation Bill, 2022 and Punjab Appropriation (Vote on Account) Bill, 2022 in the House. Thereafter on March 22, 2022 after the House was adjourned sine die by newly elected Speaker Sandhwan, it was however not prorogued by the Governor under Article 174(2)(a) of Constitution of India, asserts Hemant.

After a few days, the House was reconvened by the Speaker on April 1, 2022 and on that day the Punjab Assembly passed a resolution reaffirming claim and right over Chandigarh as Punjab’s Capital seeking its immediate transfer to the State. Interestingly, after the House was adjourned sine die by the Speaker that day, it was still not prorogued by the Governor.

Hemant says he constantly kept an eye over the issuance of requisite Notification by Punjab Governor regarding prorogation ever since the House was adjourned sine die second time by the Speaker on April 1, 2022. However, such Notification came to be published in Punjab Government Gazette Extraordinary on 18th April, 2022. However, the Order by Punjab Governor BL Purohit in this regard is of 16 April 2022. The Advocate wonders why there has been a delay of two days in this regard i.e. signature of prorogation Notification by the Governor and its Gazette Publication by Punjab Vidhan Sabha Secretariat. Amidst all this, the question arises if the House got prorogued with effect from April 16 or April 18 ?

Be that as it may, the Advocate asserts that well before that, since on April 13, the day Bhagwant Mann’s Cabinet approved the aforementioned Ordinance, the House means Punjab Legislative Assembly was not prorogued which means technically the House was in Session, hence legally (read constitutionally) no Ordinance can be either approved by the State Government (Cabinet) or even promulgated by the Governor since the very first constitutional requirement for the promulgation of Ordinance is that the Legislative Assembly should not be in session.

Hemant says that nevertheless, it is duty of senior officers of State Government especially the Chief Secretary, who is also ex-officio Secretary to the State Cabinet, to ensure that the House is prorogued by the Governor under Article 174 (2) (a) of Constitution of India before an agenda of approving any Ordinance is brought before in Cabinet meeting.