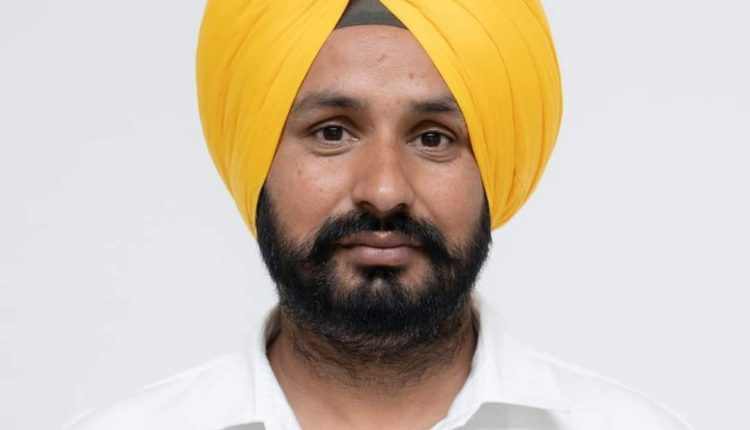 Investigation going on a war footing against opposition leaders and officers on corruption allegations; 45 government officers arrested in three months

Opposition aware of the fact that AAP is going to make hat-trick in Sangrur: AAP

Will carry forward the mission of CM Mann to raise voice of people in the parliament; Gurmail Singh

Sangrur, June 22: Waging war against corruption and mafia at once after formation of the government, Aam Aadmi Party (AAP) has equitably appeased expectations of the people of Punjab in the past three months.
The AAP government led by Chief Minister Bhagwant Mann has been relentlessly pursuing corruption allegations against opposition leaders and blue-eyed officers of the previous government, who had patronized mafia and notorious criminals.
AAP Candidate Gurmail Singh said that a decisive battle against corruption and setting up special investigation teams to probe major corruption cases including against its own sacked health minister Vijay Singla, former Congress minister Sadhu Singh Dharamsot and arrest of IAS officer Sanjay Popli, has set a benchmark by AAP in the history of Punjab’s politics under dynamic leadership by CM Mann.
“Baffled by the extraordinary decisions taken by AAP, opposition leaders are aware of the fact that AAP is going to make a Hat-trick in the Sangrur despite their nefarious tactics and scurrilous claims to tarnish the clean image of the AAP party,” Gurmail Singh said.
Fulfilling its poll-promises, AAP has approved over 25, 000 government jobs for youths, 300 free units electricity per month from July 1, Rs 1,500 per acre incentive to farmers for sowing paddy through DSR technique, MSP on Moong crop, enhanced the ex-gratia grant to families of martyred soldiers from Rs 50 lakh to Rs 1 crore, One MLA One Pension and decisive initiative to combat drug mafia and sand mafia taken by AAP government in three months, which the previous governments with lackadaisical attitude failed to do in decades.
Cracking the whip on corrupt practices, AAP launched an anti-corruption helpline and in a short span of its tenure arrested 45 government officers/ officials and others on charges of corruption.
Punjab Police has registered 28 FIRs and on directions of Chief Minister, the Vigilance Bureau has so far arrested One Sub Inspector of Police, eight Assistant Sub Inspectors, three head constables, one constable, one Home Guard of Police, two Patwaris, one clerk and other officials.
Lambasting opposition for targeting AAP government for alleged deterioration of law and order situation in the state, Gurmail Singh said that the gangsters were patronised by successive governments for the past 70 years and now they are putting all the blame on CM Mann-led AAP government’s three-month governance.
A well-educated candidate Gurmail Singh is connected to his roots and has been working diligently for the welfare of Sangrur residents for the past many years. He is a post-graduate in maths and has also done MBA. Before entering politics as a full-time politician, he was a teacher and taught children at various schools till 2018.
He became circle chief of Bhawanigarh block in 2015. He was later elected as Sarpanch of Gharachon village in 2018 and AAP had appointed him district president of Sangrur district in 2021.
Meanwhile, Gurmail Singh further said that he would carry forward the mission of CM Mann and will work industriously for the welfare of Sangrur residents, after winning this seat.

Humanity NGO Punjab President Ishu Kalra Is Doing a Wonderful job by Serving The nation at his best.