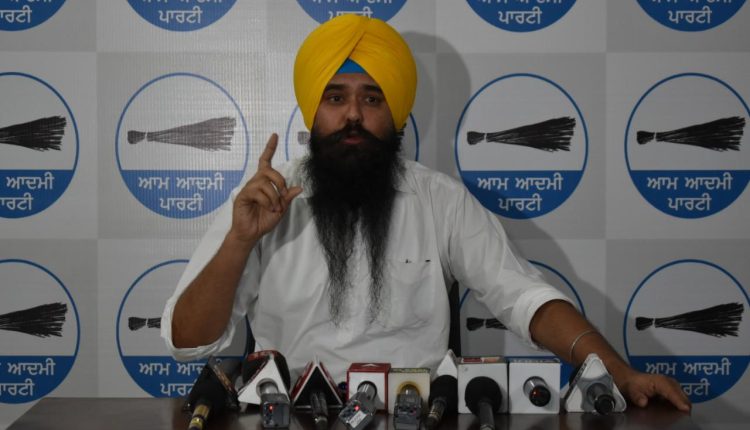 Anti-social and anti-Punjab elements have no place in Punjab, anyone trying to disturb peace won’t be spared: Malwinder Singh Kang

Chandigarh, May 1, ‘Thanks to the quick and effective action of Chief Minister Bhagwant Mann and Punjab Police the mastermind of the unfortunate incident in Patiala, Barjinder Singh Parwana who instigated violence and provoked people, has been arrested from Mohali within 48 hours of the incident.’  Aam Aadmi party (AAP) Punjab chief spokesperson Malwinder Singh Kang expressed the above in a press conference at the party headquarters on Sunday.

Malwinder Singh Kang added that, so far 6 FIRs have been lodged and 9 people, responsible for Friday’s clash in Patiala, are arrested. AAP spokesperson said that people who are trying to disturb the peace and communal harmony of the state would not be spared and CM Bhagwant Mann himself monitored the whole situation and took the essential action immediately. Any activity that obstructs peace and brotherhood of Punjab and national integrity will not be tolerated at all.

Kang said that Punjab does not need Khalistan or such anti-Punjab narrative, today Punjab needs to get back on the path of progress, our youth and farmers need to be saved, Punjab’s water and natural resources need our attention. Mann government is working tirelessly to take Punjab forward in right direction, to end mafia and corruption. But some people whose political shops and mafia business is being shut down today, are unable to digest this positive change in Punjab and that’s why they are trying to divert government as well as people from the pro-development matters.

Dr. Pushpendra Pratap Singh – The incredible journey of the Monarch of Logistics Industry