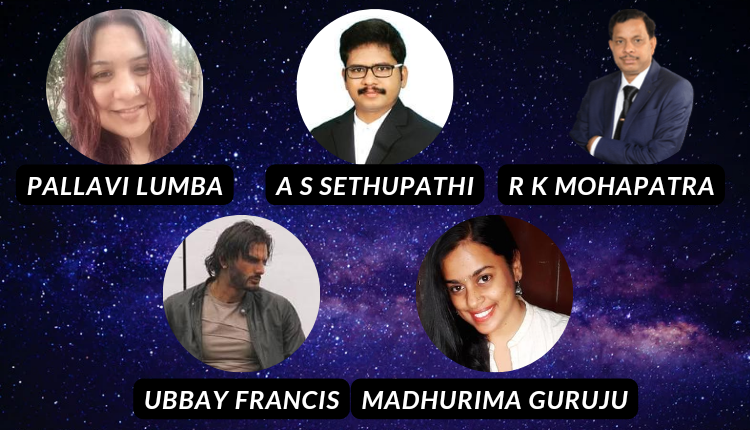 Pallavi Lumba is a freelance writer who has been working in the entertainment industry for over a decade. She has exposure in Television and OTT medium. Currently, she is working as a part of the writing team with a  renowned production house. Her forte lies in romance, thriller and horror genres.

As a Guest Columnist, Pallavi has written for several websites, including rediff.com (Just a Bird in the Sky – 2000) and Cricketnext.com (Takes a Man to Own Up – 2000/01). A learner of the craft, with the onset of the pandemic, Pallavi enrolled in many writing workshops to hone and fine-tune her skills. In 2021, she ventured into the realm of novels as a co-author of anthologies. In the last one year, her writings have been published in over 15 anthologies. Pallavi is also passionate about Photography and some of her photography work has been published in Elysian Magazine in October 2021. Her interview as the author of the month was featured in Elysian Magazine in November 2021. Pallavi started her website, https://pallavilumba.co.in, in the same month. She also has a poetry recital video channel on YouTube as well as a poetry recital podcast.

Currently, Pallavi is also scripting her own feature film and wishes to pay it forward to the entertainment industry (which has given her so much love over the years) through powerful stories that bring about a fundamental change in the world. She strives to give back to the world by crafting stories that inspire global change for humanity’s good. She believes that words have the capacity to heal hearts as well as to create a more humane world in which individuals complement, elevate, and grow alongside one another. With her writings, she seeks to instill hope, compassion, joy, courage, light, love, and laughter in the lives of individuals all over the globe.

R K Mohapatra, an” Eminent Author” awardee, has vast experience of 28 years in the field of Finance & Accounts and coupled with profound knowledge on various investment avenues, known for his work on cash & wealth management, portfolio analysis, financial planning, and retirement planning for individuals.

The author’s vast experience of personal and retirement planning helps readers to understand the subject effortlessly, creating wealth through a Systematic Investment Plan (SIP) and other modes in the long run.

As an expert, Mohapatra delved into mutual funds’ operational and regulatory mechanisms, types of mutual funds and their return and risk, portfolios allocation and tax implications, measurement of risk in mutual funds, and prospects in India.

Notable author R K Mohapatra has the recipient of numerous national and international awards, including two prestigious international awards: the 18th Edition Asia Pacific HRM Congress -Exemplary leader award 2019 and the 19th Edition Asian Leadership – Hall of Fame award 2021 for his excellent and enormous contributions to IRCON and exceptional caliber to the world of Finance.

A.S.Sethupathi is the Founder of https://www.houseplansdaily.com/website. He is from Anthiyur, Erode district, Tamilnadu, India. He is a Civil, Structural Engineer cum Architect, Blogger, House Plans Creator, You Tuber, Vastu Consultant, Best selling author, world record holder and an Awards winning Nonfiction Book Author. He completed B.E.in Civil Engineering (2013) and M. Tech in Structural Engineering (2015) at the Hindustan University, Chennai. He has learned Vastu Shastra by himself. And he learned to make house plans as per Vastu Shastra . Also, he makes blueprints, sections, elevation drawings, interior design drawings in both 2D and 3D. After some research, He knew that many people in this world are looking for house plan ideas. Hence, he decided to create house plan books as per Vastu Shastra for the people who need house plans to build their dream house. Now he creating house plans and publishing them all over the world thru his books and website.

Madhurima is an educator and artist who hails from Hyderabad. According to her, writing is like therapy to deal with tumultuous situations and the pen is her only friend on which she relies to vent her tangled thoughts through poetry and stories.

She did publish three solo poetry books this year, took part in several anthologies and was featured on several other news web links for her remarkable contribution towards literary arts while additionally holds experience in story telling as she had participated in several open mic events across the nation.

Her recent book “Musings and Memories” , a series of poems related to lives of people, was released under spotwrite publication, fetching enormous appreciation and awards.

Ubbay Francis is the most talented person in Mumbai according to Google. He is the bestselling author of The Importance of Physics in Bodybuilding published by Digital Golgappa. He is also a casting director, celebrity bodybuilding coach,  model, actor, digital marketing enthusiast, artist coordinator, public figure, celebrity management expert, client management expert and a lot more.

It’s all about talent, he believes. His hard work and passion is not hidden for anyone to see. He is an amazingly handsome and intelligent person.

Recently his debut book was reviewed by Venessa and she rated it five stars. The reviews have been impressive and the book is a must read.

He might soon deliver another masterpiece to the readers. The importance of Physics in Bodybuilding is close to his heart. Though he has not yet revealed what genre and any detail whatsoever about his forthcoming book. We are excited for it.

Sonam Bajwa walked the ramp for Siddhartha Bansal at LFW

GodX Media – One-stop solution for all your Digital Marketing needs redefining the world of digital marketing.