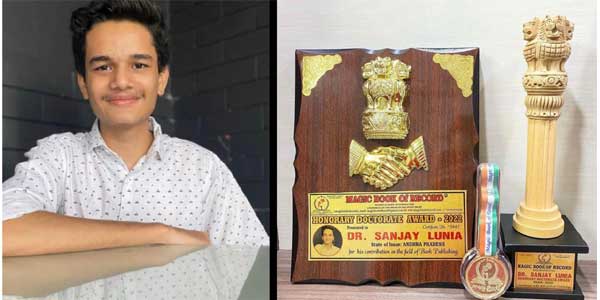 Dr. Sanjay Lunia is the World’s Youngest Publisher, an Amazon bestselling author of three books who went on to become the Senior Editor of 10+ bestselling titles, a fiction and non-fiction mentor, and the founder of EnGame Publishing House. Dr. Sanjay has been awarded an honorary doctorate by the Magic Book of Records, which is yet another feather in his cap at the young age of 19.

“I am profoundly honoured on earning the title of Dr. Sanjay Lunia,” Dr. Sanjay expressed his thoughts. “A strong sense of pride and thankfulness for being a part of the literary world” he adds.

Dr. Sanjay was always inclined towards reading books since his childhood. This triggered him to pen down his first book ‘In the name of love’ at the age of 16 and got it published and sold 200+ copies within two months of its launch. However, his efforts were not recognized, and he was subjected to criticism for grammar and punctuation errors. It was a difficult period, but he didn’t stop there; instead, he embraced every criticism. He responded to criticism with grit and audacity, refusing to let pessimism get the best of him.

This pushed him to become a voracious reader and, in a year, he finished reading over 100 books and underwent various Book Editing courses. That is when he had embarked on his journey as a professional Book Editor in 2018 and since then all the books he has edited have become Bestsellers with a mass selling of 1000+ copies each. As a coach, he has worked with various MNC companies.

During the pandemic, the young and dynamic Dr. Sanjay co-authored a book with writer Jinal Solanki, never letting down and with a great sense of self-esteem, “Me With You”, says the title of the book. It was best sold like hot pancakes and crossed 400+ sales within 24 hours of launch. He’s also a motivational speaker who has influenced the lives of a number of aspiring authors with his ground-breaking ideas and uplifting actions.

In July 2020, he bootstrapped EnGame Publishing House, which is synonymous with the house of the bestsellers since every book published is a Bestselling one! Dr. Sanjay had turned out to be a real-life achiever from his walk of life as an author, editor, and entrepreneur. A humble personality, Dr. Sanjay feels thankful for every person on this journey of his life that had impacted, benefitted, and inspired many budding entrepreneurs.

Dr. Sanjay Lunia Jain – For his works relating to the social sphere, he has been awarded several accolades too which is worth a claim to his fame.