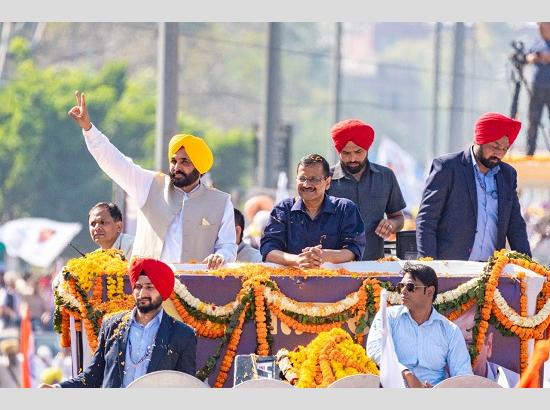 In the entire world, only Punjabis can bring such revolution: Arvind Kejriwal

After decades, Punjab has an honest Chief Minister: Arvind Kejriwal

Thousands of people had arrived from every corner of Punjab to be part of the march with Arvind Kejriwal and Bhagwant Man and welcomed both the leaders by showering flowers.

Addressing the people of Punjab, Arvind Kejriwal said, “Love you Punjab! you have done a wonder. Only Punjabis can bring such a revolution in the whole world. Today Punjab’s revolution is being discussed all over the world. The world knew that the people of Punjab are revolutionaries, you proved it again in these elections. All the big leaders, who thought themselves to be too powerful to lose, you broke everyone’s ego.”

Kejriwal said that after decades Punjab has got an honest Chief Minister. Bhagwant Mann is staunchly honest. AAP government will be an honest government. If any of our MLA or ministers will misuse the power, we will take immediate action against him. On March 16th, not only Bhagwant Mann, but all the people of Punjab will become the Chief Minister in Khatkar Kalan. I request you all to come to Khatkar Kalan, the land of Shaheed-e-Azam Bhagat Singh, to grace the swearing-in ceremony and start building a new Punjab by participating in that historic ceremony.

Kejriwal said that the Aam Aadmi Party government will take Punjab on the path of progress. We will make Punjab ‘Rangla’. Every penny of public money will be spent on the people. We will fulfill all the guarantees we have promised to the people of Punjab. It may take some time, but no guarantee will be abandoned.

Mann said that after 20 days of hunger strike and a long struggle, Arvind Kejriwal formed the Aam Aadmi Party. Contested elections in Delhi on donations given by the people and formed the government. The Aam Aadmi Party aims to do politics for the betterment and upliftment of the common people by eliminating corruption and nepotism from the politics of the country.

Mann said that the Aam Aadmi Party government will solve the problems of the common people and ensure their safety. And for the same, we have already withdrawn the security of 122 leaders because now hundreds of those police personnel will be deployed in the service of the public instead of politicians. 17 police vehicles were taken back from the leaders. We will get the police to do police work and create a safe environment for the common people.

He said that we have to fulfill the dreams of Babasaheb Dr. Bhimrao Ambedkar and Shaheed-e-Azam S. Bhagat Singh. The ideology of Shaheed Bhagat Singh has to be carried forward. To pay homage to our great freedom fighters who laid down their lives for our country, instead of Raj Bhawan, we are organizing the swearing-in ceremony in the land of martyrs Khatkar Kalan, informed Mann.