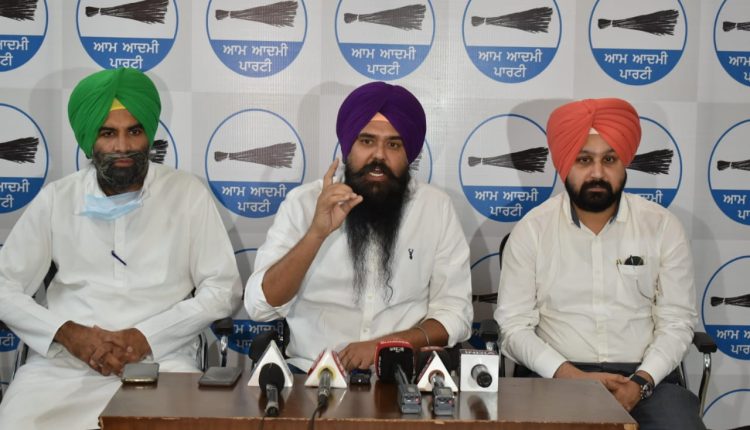 Chandigarh, April 24, ‘Mann government is committed to ensure quality and affordable basic education in the state. So the condition of government schools and education system is being improved and government is also regulating fees of private schools.’ Aam Aadmi Party (AAP) leader and chief spokesperson Malwinder Singh Kang expressed these views while addressing a press conference at pary headquarters on Sunday. On this occasion he was also accompanied by party spokesperson Dr Sunny Singh Ahluwalia and Advocate Ravinder Singh.

Malwinder Singh Kang welcomed the decision of Punjab’s Education Minister Gurmeet Singh Meet Hayer who ordered an enquiry against 720 schools, based on the complaints received from parents about school not following government’s latest guidline to not increase fee in this session. He added that education minister has ordered enquiry based on the complaints of parents that some schools still continued their financial exploitation and if any school found guilty during investigation, strict action will be taken against them.

Malwinder Singh Kang said that Aam Aadmi Party promised the people of Punjab good and affordable education and AAP government, led by CM is Bhagwant Mann, is fully committed to ensure that. Now Mann government is living upto their election promise and expectations of it. First, to end the loot and arbitrariness of private schools Punjab government had ordered that no private school will increase their fees for this session and parents will not be forced to buy books and school dress from any particular shop. And now when there are few complaints there government is immediately addressing them.

Malwinder Singh Kang said that if any school found guilty of looting and exploiting parents then strict action will be taken against them and even affiliation of that school can be revoked. He added that any kind of loot of common people will not be tolerated in AAP government and immediate action will be taken just like education minister did in this matter.

Mann government aims to provide employment, not take it away: Dr Sunny Ahluwalia

Chandigarh: Welcoming the Punjab Government’s decision to take back the ban on ‘jugad rehris’ in the state, AAP spokesperson Dr Sunny Singh Ahluwalia said that the Mann government aims to provide employment, and not to make anyone unemployed. He said that the Department of Transport had issued orders to remove the jugad regris but Chief Minister Bhagwant Mann met and directed the authorities to immediately withdraw this order. Jugad Rehri will now be allowed in Punjab so that the poor can earn a living and support their families. Dr Ahluwalia also welcomed the Punjab government’s ban on bouquets and plastic water bottles at government functions.