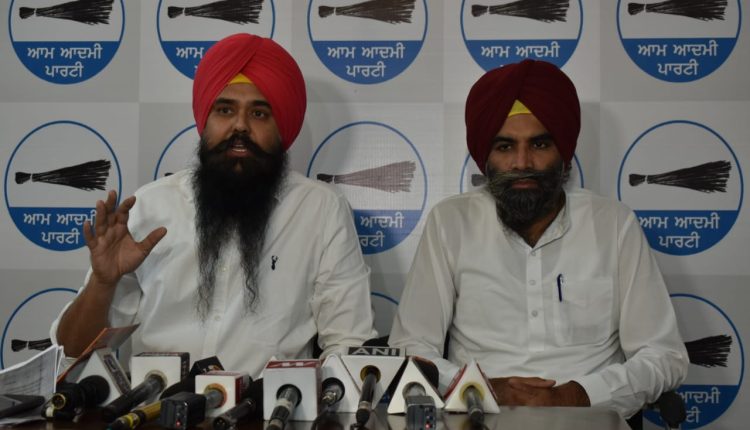 Chandigarh, April 23, Aam Aadmi Party (AAP) Punjab senior leader or Chief Spokesperson Malwinder Singh Kang, addressing the issue of arrest warrants against some farmers of Firozpur district, said that the opposition parties are doing this propaganda to defame Chief Minister Bhagwant Mann and Aam Aadmi Party. These arrest warrants were issued to the farmers last December during the time of former Chief Minister Charanjit Singh Channi of the Congress government. He accused that to hide their own misdeeds and anti-farmer steps Congress is levelling such false allegations against their government.

Addressing the media at the party headquarters on Saturday, Kang showed the copy of the arrest warrant issued against the farmers in December last year and said the same orders had been re-issued by the officials of concerned department. As soon as the government came to know about this matter, the arrest warrants were immediately withdrawn and action will be taken against guilty officials.

Kang said that Chief Minister Bhagwant Mann has directed the officials to not issue any summons or warrants against farmers and their government is formulating new policy to bring farmers out of mire of debt and make farming a profitable profession. Mann government will not only get the farmers out of debt, but they are also working in this direction to make better policies for farmers and agriculture sector so that farmers do not have to take loans.

On the re-implementation of Amnesty scheme by the Mann government, party’s chief spokesperson Malwinder Singh Kang welcomed this decision and said that it will provide a lot of relief to small transporters of Punjab and give them another opportunity to pay tax without any penalty. The revenue of the state will also increase from this scheme, which will be used for more public welfare schemes.

Through Amnesty scheme these transporters will get the time of three months i.e., from 25-4-2022 to 24-07-2022. Transporters who were unable to pay tax due to corona virus induced lockdown will be given one more chance to pay tax without any penalty.