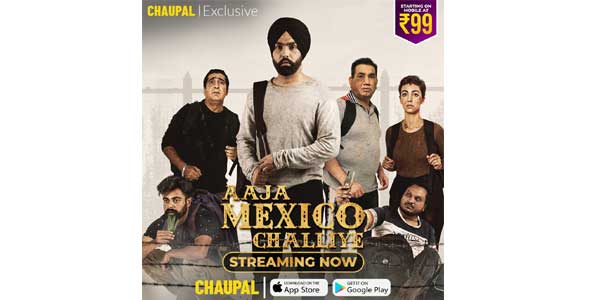 Chaupal OTT has once again surprised its users and potential subscribers by adding another powerful film to its catalog. Recently released in the theaters worldwide, the Punjabi movie, ‘Aaja Mexico Challiye,’ is now successfully streaming on the Chaupal OTT app. Written and directed by Rakesh Dhawan, this thriller drama stars Ammy Virk, Nasir Chinyoti, and Zafri Khan as lead characters. A portrayal of harsh reality, ‘Aaja Mexico Challiye’ showcases the lives of illegal immigrants who travel through Mexico to enter the United States.
In the film, a young and ambitious Punjabi man, Pamma, desires to go to America for a better life and future. He, along with a few others, takes up the journey to a foreign land through an illegal route via Mexico and faces life-threatening situations on the way.
This must-watch film, which showcases the risks and dangers involved in moving abroad illegally, is now easily accessible to all on the Chaupal OTT. To watch the movie, download and subscribe Chaupal app now.

You can choose a monthly mobile-only plan worth ₹99, a premium yearly plan worth ₹799, or an annual family plan worth ₹999.
Next, ‘Babbar’ is coming soon on the Chaupal app to entertain the audiences and home deliver amazing content.