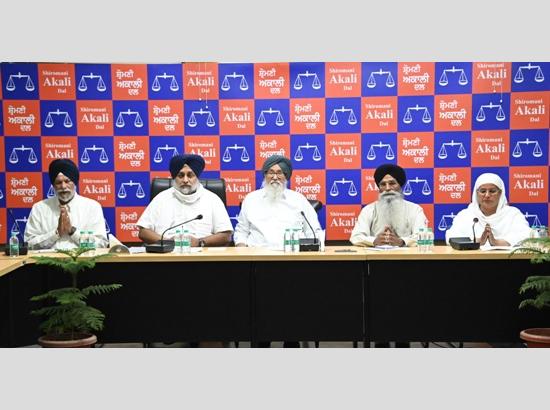 “The Core Committee is especially proud of  the brave, selfless and tireless manner in which the President led the party from the front in true Panthic traditions during the six-month long  campaign for the just concluded poll for the Punjab Vidhan Sabha,” said a resolution passed at the Core Committee meeting.

Addressing the meeting,  Badal said that the party will continue its fight to safeguard the interests of Punjab, Punjabis and Punjabiat, upholding the glorious traditions and values of the Khalsa Panth.

Today’s  meeting which began with the recitation of the sacred mool mantra,  “humbly and sincerely  bowed before the mandate of the people of Punjab in the just concluded Punjab poll.”

The meeting was chaired by the party’s patron in Chief and former Chief Minister Parkash Singh Badal.

The party said that it is proud of the brave and tireless manner in which the party’s leaders, candidates and  workers worked during this campaign.

In another resolution, the  meeting expressed its “profound  gratitude to ”millions of Punjabis who expressed their faith in the party by voting for its candidates.”

Giving details of the meeting to the media persons, Harcharan Singh  Bains, Senior Vice President of the party said that the deliberation to analyse   poll mandate will continue tomorrow when senior leaders will discuss the details of  the  results with the president at the party headquarters. This will be followed by more meetings of the   in the coming days, with  senior leaders analyzing these results with the president tomorrow

This will be followed by a meeting of the district presidents ( Zila Jathedars) of the party  at 2.00 pm on March 16. The party’s   candidates in these elections will meet Mr Badal at two PM on March 17, Mr Bains disclosed.

Meanwhile, Sukhbir Singh Badal has asked the party’s candidates to start the rounds of their constituencies to thank the electorate after the meeting in Chandigarh.