Shyam Benegal unveils poster of ‘Mujib – The Making of a Nation’, biopic on Sheikh Mujibur Rahman 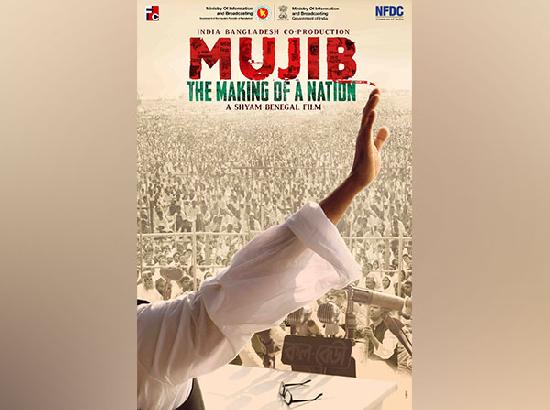 Mumbai (Maharashtra), March 18, 2022 (ANI): Veteran filmmaker Shyam Benegal has unveiled the poster of his upcoming biopic feature on ‘Bangabandhu’ titled ‘Mujib – The Making of a Nation’.

‘Mujib – The Making of a Nation’ is an India-Bangladesh co-production on the life of Sheikh Mujibur Rahman, the father of the nation of Bangladesh, under an audiovisual co-production agreement between the Republic of India and the People’s Republic of Bangladesh. Directed by the legendary filmmaker Shri Shyam Benegal, the film was extensively shot in India and Bangladesh, abiding by all the health guidelines amidst the COVID-19 pandemic. The film was wrapped up in December 2021.

Mujibur was born in a prestigious Muslim family. Growing up in a religious and harmonious atmosphere, he was very kind to the poor and was empathetic towards them.

Inspired by Mahatma Gandhi, Mujibur struggled against the disparity and deprivation between West Pakistan and East Pakistan and against the Pakistani Military rule. Imprisoned for about 11 years between 1947 to 1971, he strived and achieved an independent and sovereign state ‘Bangladesh’ that’s why Mujib is known as the father of the nation of Bangladesh and ‘BANGABANDHU’.

Director Shyam Benegal said, “I am glad to be working on this feature film, it has always been a fruitful association working with NFDC since its inception and now collaborating with BFDC was a joyful experience. Mujib – The Making of a Nation, remains a very emotional film for me, To bring Bangabandhu’s towering life on reel is a tough task, we have portrayed his character in an uncompromising way. Mujib, remained a great friend of India, we hope the poster connects with the audiences.”

Bangladeshi actor Arifin Shuvoo who plays the role of Sheikh Mujibur Rahman shared, “Fascinated to be playing the role of Mujib, this is a dream come true, I am honoured to be part of this iconic project, and to be directed by the legend himself, Shyam Benegal ji, no words to express how big this feature film is for me and for my nation. I felt the warmth, and great hospitality during the production of the film in India. Hopeful, that I have justified the role and the audiences will connect with me and love the way they do for Bangabandhu.”

The film is written by Atul Tiwari and Shama Zaidi. The line producer of the film is Satish Sharma, the action direction is done by Sham Kaushal, the editor is Aseem Sinha, the Associate Director of the film is Dayal Nihalani, costume designer is Pia Benegal.

The production designer is Nitish Roy, music is composed by Shantanu Moitra, the Director of Photography is Akashdeep, the choreography is Masum Babul, the art director is Vishnu Nishad. Casting of the film is done by Shyam Rawat and Baharuddin Khelon. (ANI)