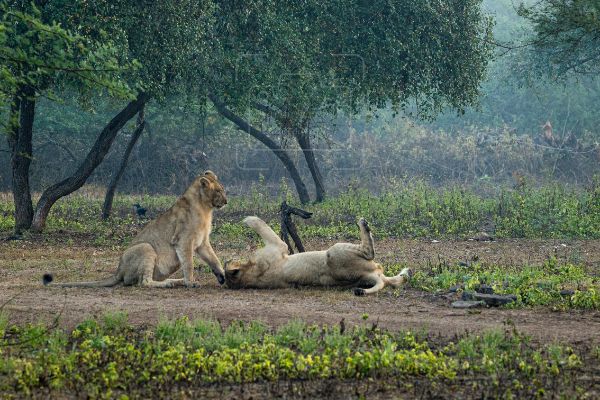 However, a sobering thought often follows that moment of awe that we could never take a picture like that, or that those with a little more confidence would think they could if they had the proper equipment, but Wildlife photographer Karim made everything possible, and the live example that speaks is the lion family morning roaring, where Lion Pride greets sunrise with ferocious roars (Asiatic Lions of Sasan Gir, India). The Asiatic Lion, often known as the Panthera leo, is a Panthera leo population that only exists in India today. Its range has been restricted to Gir National Park and the neighbouring areas in the Indian state of Gujarat since the turn of the twentieth century. Wildlife photographer Karim claims that the most crucial factor in a successful capture is time, and he is correct, as evidenced by his achievements.

He was also the one who captured the rare leopard fight video and the Amur Falcon sighting. Wildlife photographer Karim is unquestionably brave, especially when surrounded by animals. His eyes discern whether the frame is correct or which photograph best tells the story. His crafts, as well as his camera, deserve recognition. There are instincts of perseverance, courage in the face of failure, incessant experiments, and introspections that make one successful and popular in a certain field, and these are the instincts of perseverance, courage in the face of failure, endless experiments, and introspections. Wildlife photographer Karim is always on the lookout for intriguing behavior in order to better understand the animals, and there is always a special connection between him and the subject in his photographs.

The wait is over now, dubbing of the much-awaited Punjabi film ‘Shakar Paare’ is completed, releasing very soon.